In April, a dream that I’ve had since falling for the Harry Potter series came true.

No, an owl did not drop my acceptance letter into my house.

And, no, I did not get to take a ride on the enchanting Hogwarts Express.

Instead I boarded the Harry Potter emblazoned double decker bus to the Warner Bros. studio, giggling like a pre-teen fangirl!

Located about 20 minutes outside of London, these studios were the production home to all 8 Harry Potter films. Today they house many authentic sets, props, and costumes from the movies, and also demonstrate some of the technology that was used to bring J.K. Rowling’s wizarding world to the big screen.

We got in line and right away you come across The Cupboard Under the Stairs, which is the smallest set from the movies. 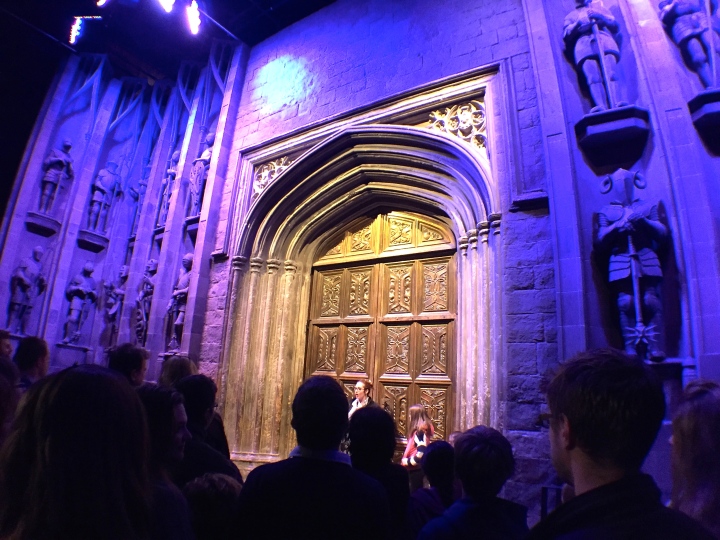 The tour begins in a small auditorium with a video presentation. The writers and producers talks about how they decided to turn the Harry Potter books into films and there are some behind the glimpses from all the films, as well as commentary from the actors. 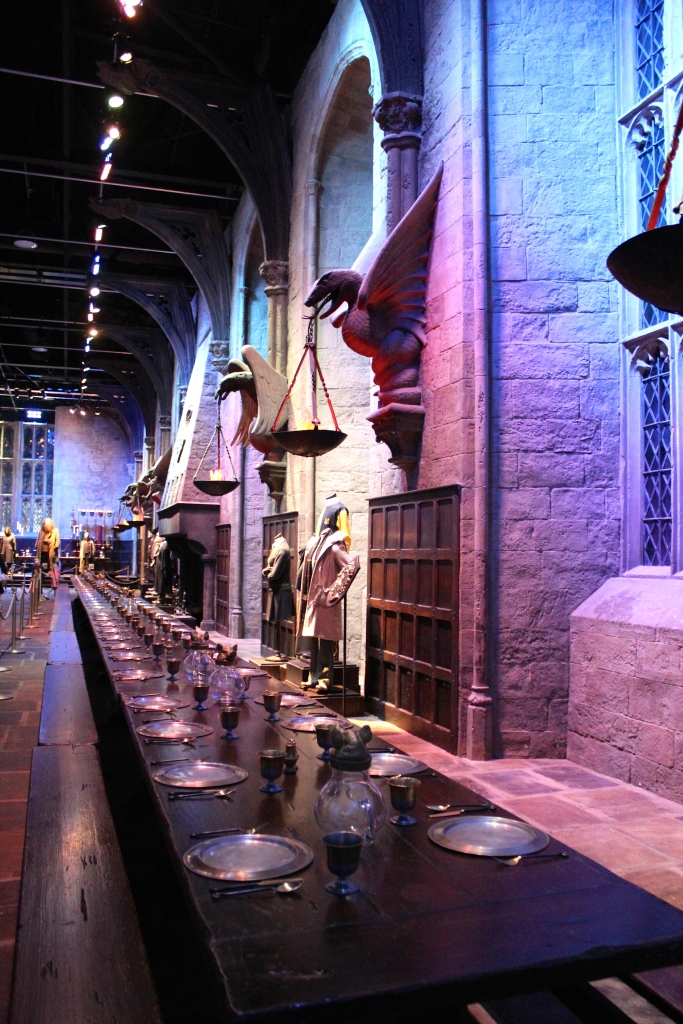 From there everyone is led into the Great Hall of Hogwarts, a set that was built for the first movie in 2000 and used in all subsequent films until the Deathly Hallows Part 1. One of the most obvious observations in the Great Hall was that it was missing the “enchanted ceiling”. Now, in addition to the two long dining tables, the room is filled with costumes from the different films. It was interested to see how much the actors had grown (or hadn’t grown…) over the course of the films.

After being ushered out of the Great Hall, visitors are then free to take as much as they’d like to explore the rest of the studios. 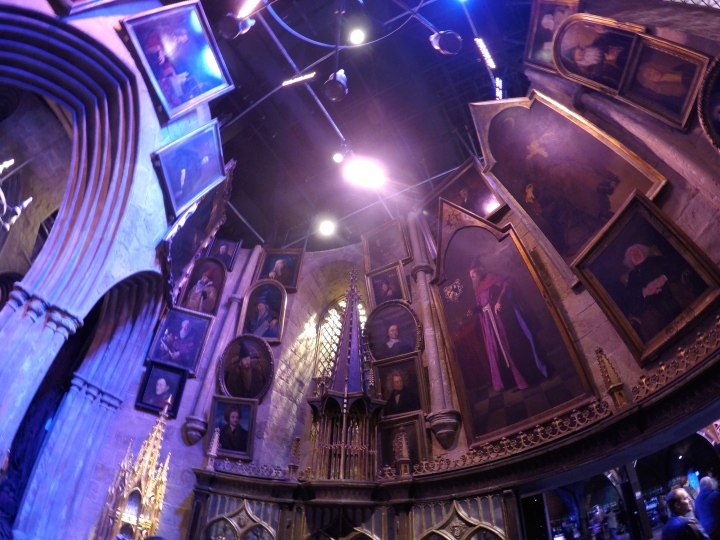 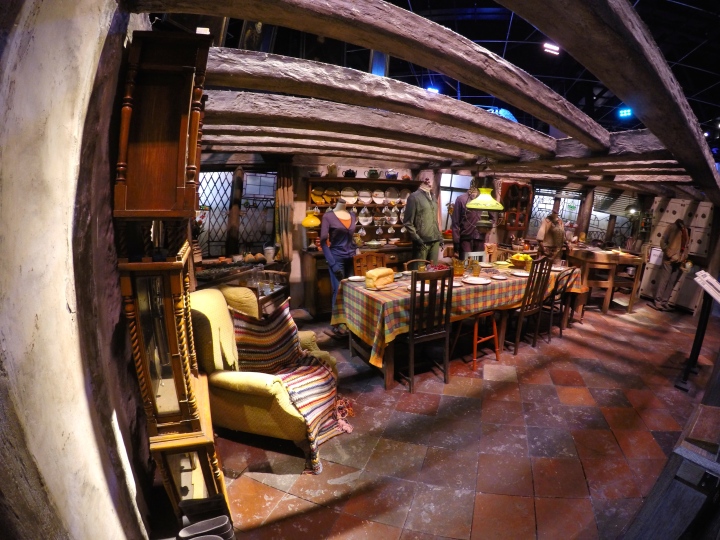 The first area is a large room that contains a lot of the sets, costumes, and props used in the movies. Think…the Gryffindor common room in its entirety, Dumbledore’s office, and the Burrow. In addition to just seeing everything, the studio did a great job of placing information placards just about everywhere detailing what things were, how they were made, and when they were used in the movies.

One of the most creative and magical aspects of J.K. Rowling’s Harry Potter books is the game of Quidditch played on flying broomsticks. At the studio, one of the few interactive activities is the green screen room, where you can sit astride a broomstick! Make sure you watch the whole video as I whizz through the streets of London! We also got our photos taken against another green screen background in the flying car from Chamber of Secrets! 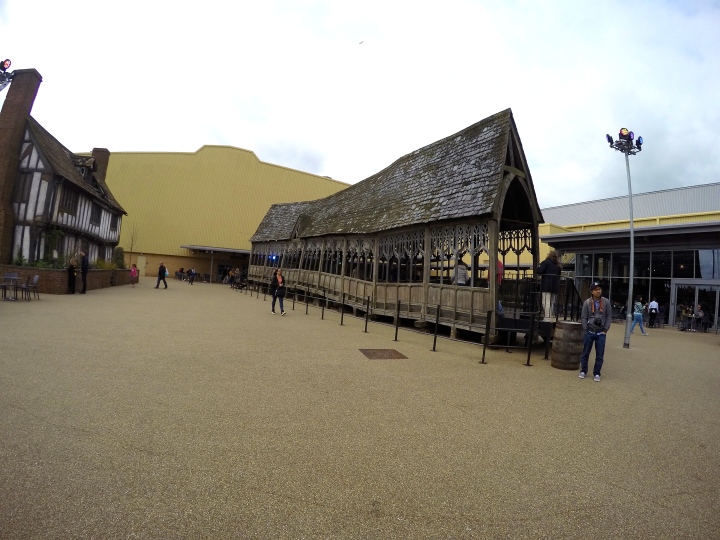 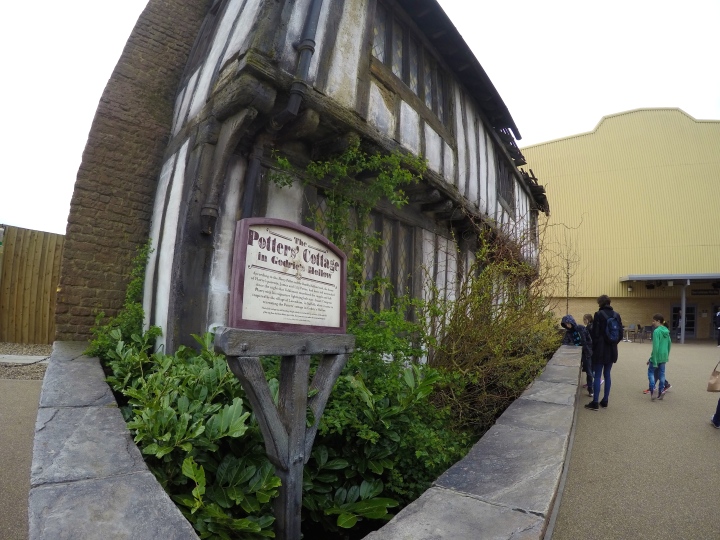 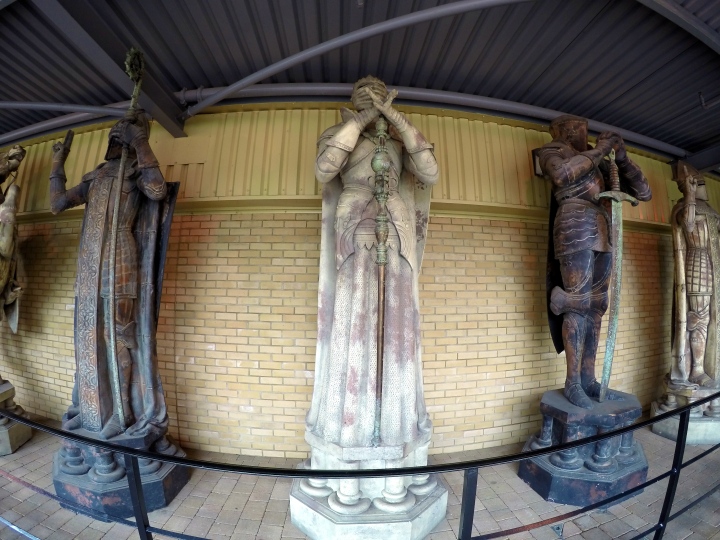 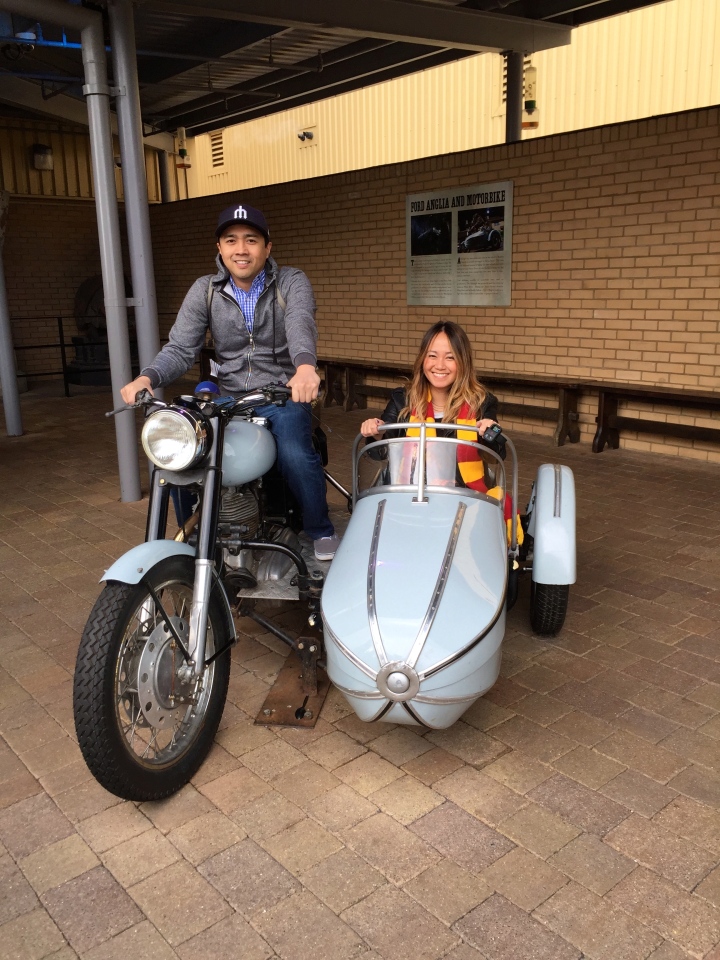 Once we’d seen everything there we moved onto the backlot, an outdoor area featuring some of the exterior sets. Here you can take a look at No. 4 Privet Drive, the blue Ford Anglia, and Hagrid’s bike, among others. You can also hop on the Knight Bus for a photo and TRY BUTTERBEER which tastes like cream soda with butterscotch whipped topping! As this is only one of two places in the world you can try it, I had to order a glass. While I’m pretty sure you’d get diabetes if you drank butterbeer on a regular basis, a few sips were deliciously sweet. 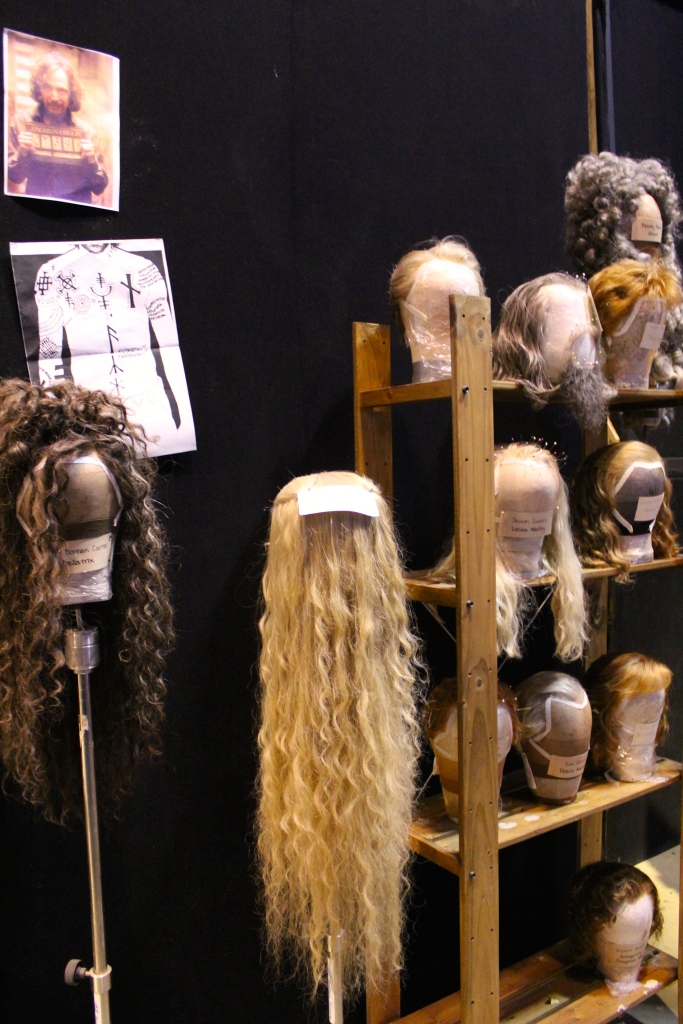 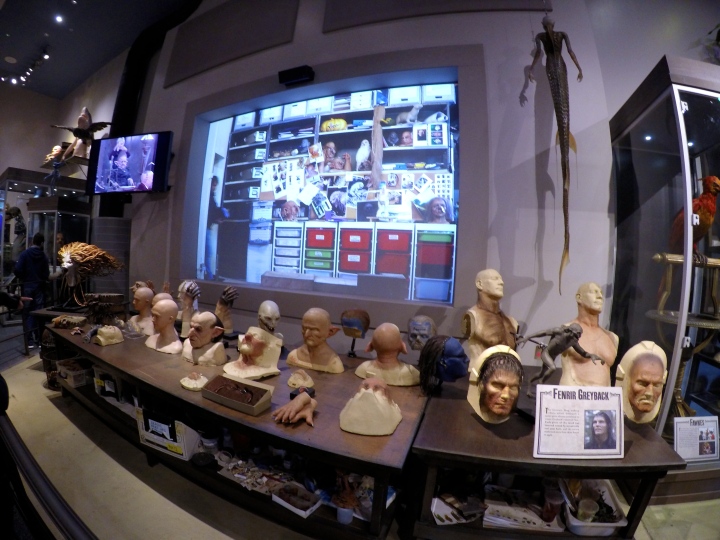 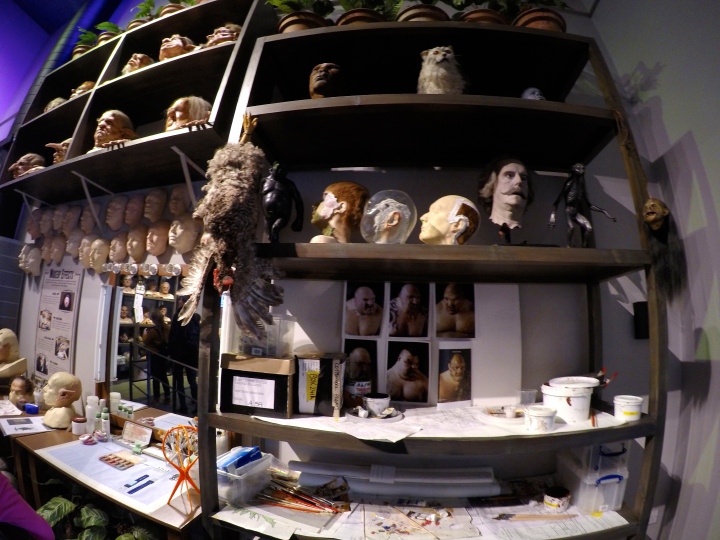 Moving on, we went back inside, this time to the creatures and art department. Here we learned about the technology that was needed to bring all of the non-human creatures to life and saw how the artists planned the sets. As you can imagine, the amount of planning that went into creating these large, detailed sets and making monsters and goblins and other mythical creature come to life was extraordinary. 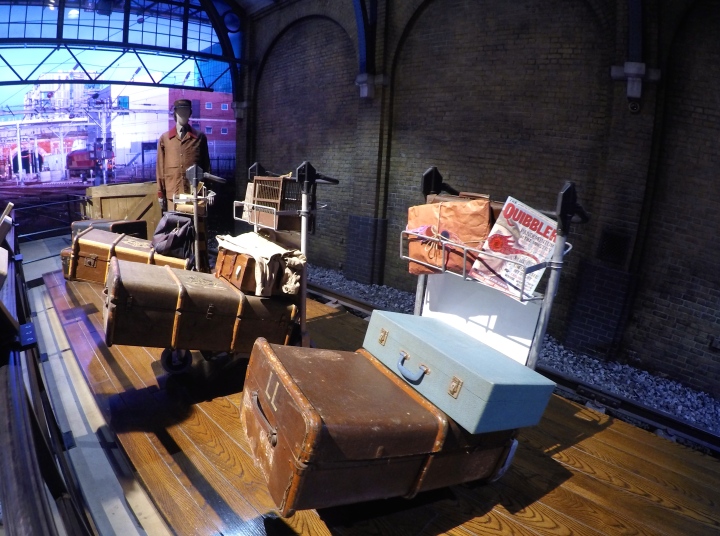 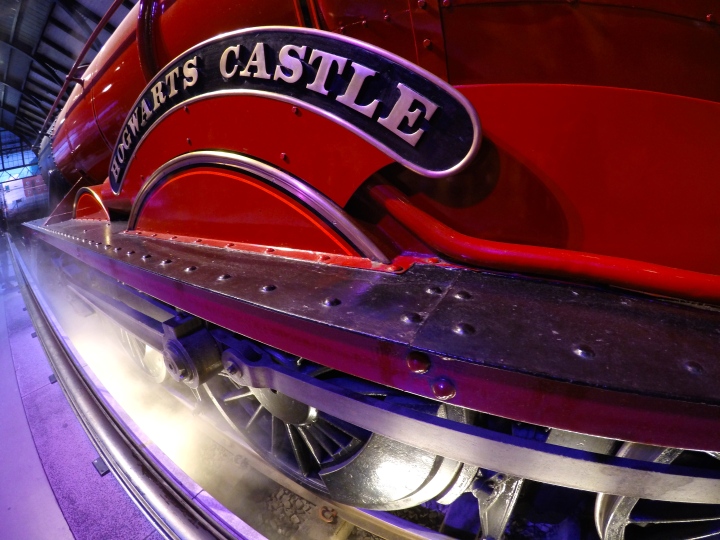 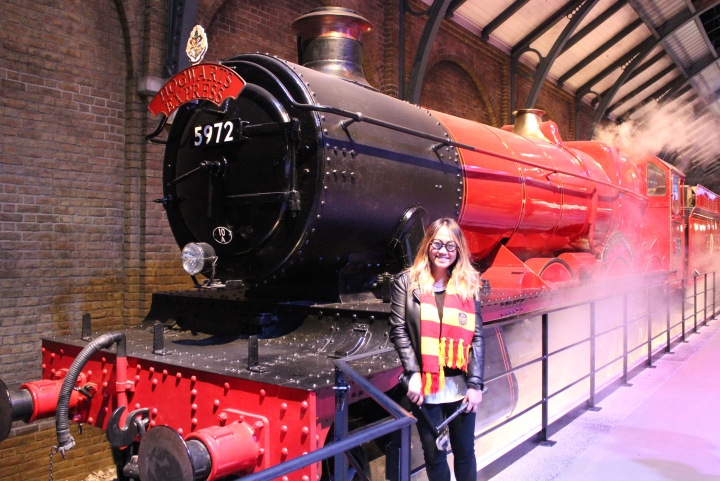 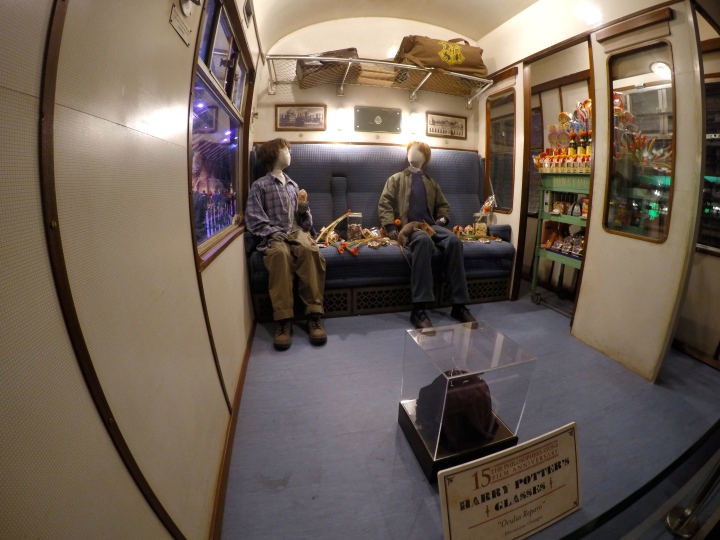 Next stop was the 20,000 square foot space, which includes the original Hogwarts Express steam engine and a recreation of the iconic platform 9 ¾! So freaken amazing! We got to climb aboard the train’s carriage and, of course, pose with a luggage trolley as it disappears through the platform wall. 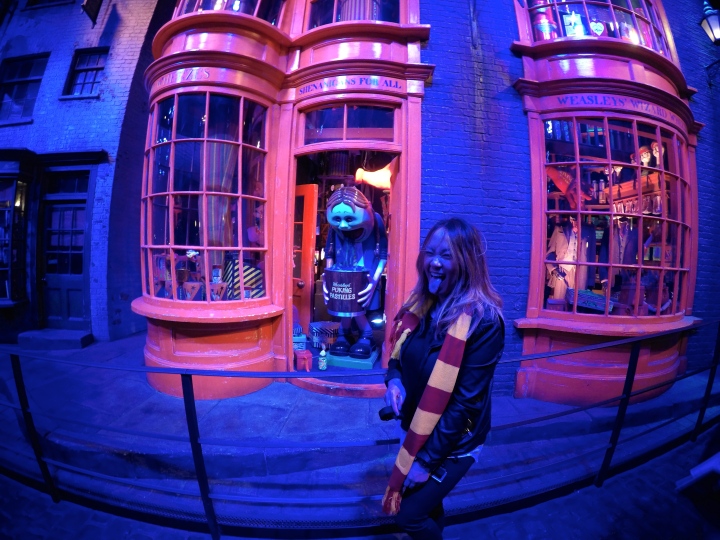 Nearing the end of the experience, we arrived at my favorite part of the day- Diagon Alley. Walking down the street and passing all the exteriors of the shops where Harry and his pals did their pre-term shopping, I really felt like I was exploring this magical town. And I wished more than ever I was a wizard and not a mere Muggle.

We then arrived at the centerpiece of the studio tour, a handcrafted model of Hogwarts, built to scale. Visitors are able to walk around the entire model, which is nearly 50 ft in diameter, while it moves through its 4 minute day to night cycle. It’s a truly beautiful end to my Harry Potter experience.

One thought on “THAT TIME I VISITED HOGWARTS”