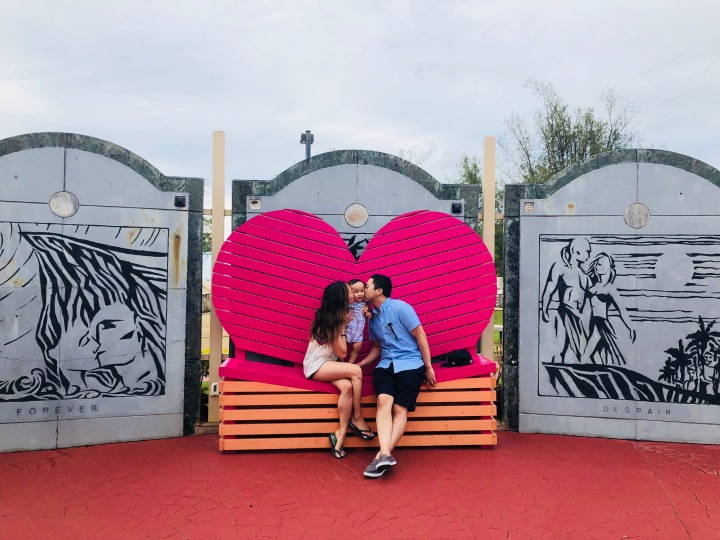 Puntan Dos Amantes, or Two Lovers Point, is without a doubt one of Guam’s most iconic attractions. Every year, hundreds of thousands of visitors are drawn to the towering cliff that is the site of one of Guam’s most well known and romantic legends.

The legend of Two Lovers Point is a timeless, bittersweet tale of eternal love. Long ago, during the Spanish colonial era, there lived a family who owned a great deal of land and were highly respected in the community. The father was a wealthy Spanish businessman and the mother was the daughter of a great maga’låhi (Chamorro chief).

Their oldest daughter was a beautiful young woman, admired by all for her natural charm. One day, the girl discovered that her father had arranged for her to wed to a powerful Spanish captain. She was so distraught that she ran away and kept running until she found herself on a secluded and peaceful shore.

There on the shore she met a young man from a modest Chamorro family. He was a gentle man with a strong build and she fell in love with him under the moonlight. She returned home with a promise to see him again.

When the girl’s father learned of the two lovers, he became angry and ordered her to marry the Spanish captain at once. However, that day at sundown, she slipped away and once again met her Chamorro lover.

The girl’s father, the Spanish captain, and a group of Spanish soldiers pursued the lovers up to the high cliff above Tumon Bay. The couple found themselves trapped between the edge of the cliff and the approaching soldiers. All the young man could do was warn them to stay back. The father ordered the soldiers to halt.

The lovers tied their long black hair together into a single knot. They looked deeply into each other’s eyes and kissed for the final time. Then they leapt over the long, steep cliff into the roaring waters below. Her father and all who remained rushed to the edge and stared in great anguish at the ocean below.

The lovers were never seen again. From that day on, the towering cliff became forever known as Two Lovers Point (Puntan Dos Amantes).

Today, the Two Lovers Point site features two tiered lookout points that offer a sweeping view of breathtaking Tumon Bay, high above crashing ocean waves 400 feet below. In the middle of the park, a magnificent brass statue of two lovers locked in an embrace gleams in the sun and extends to the sky.

venice nights 🫶🏼
dollar hits…hits home 🍢🍢🍢 #laeats #lastreetfood #insidecamsbelly
I just love her stinkin’ face 🧀 #raisingreagan_ #cheesinhard
morning cup of { k a h • p é } ☕️ #camslovesmocha #kaperepublik
my handsome date 💙 #averymommysdream
this wedding had me in tiers 🌸 #camstravelgram #sacredmountainjulian
Sip sip, hooray 🧋
when there are no sunflowers 🌻 #raisingreagan_ #yourethesunflower
happily ever after 🤍 #fortheREYESofourlives
ever thine ever mine ever ours
We could not have asked for a better day, or family 💕 We love you guys!
always by our side 💚